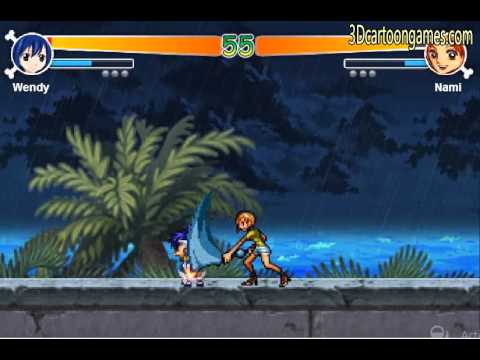 The fairy tail vs One Piece fighting series just launched its latest version 0.7 with additional characters from both mangas. The participation of pirates Ace and Trafalgar Law from One piece and two young females Wendy Marvell and Mirajane Strauss from Fairy Tale will makes the One Piece game more thrilling. Now we will list some special powers of these new fighters. Pirate captain Law or known as surgeon of death has a skilled swordsmanship besides power from devil fruit he consumed. Ace has physical prowess and manipulates fires. In Wendy’s depiction, she is honest, brave, has related traits to Sky Dragon slayer, is capable of manipulating air to attack opponents. Unlike Wendy, her mate Mirajane a popular member of the Fairy Tail guild possesses the spell of Satan Soul giving her abilities and power of demonic being, this form allowing her to fly, or to destroy solid objects with her powerful kick and punch.

Fun game but I think they should add Laxus,Sting,and Rouge

Awesome! I had no idea that version 0.7 was out. I better get busy on making my own vid. Sweet combos btw.